A pioneer of the radical language of Cubism, a movement that redefined painting in the 20th century, Georges Braque (1882-1963) is a seminal figure in the history of modern art.

Born in a suburb outside of Paris, Braque first learned to paint from his father, who ran a house-painting and decorating business that specialized in trompe l’oeil effects. Following in his father’s footsteps, he dropped out of art school to apprentice as a decorator and house painter, and in 1900, he moved to Paris to study under a master decorator. While in Paris he continued to take painting classes in the evenings, and at this time he met artists such as Henri Matisse and André Derain. Though he would pursue a different course, Braque would draw from the technical knowledge he learned as an apprentice craftsman throughout his career.

It was not until 1902 that Braque dedicated himself to fine art full-time, enrolling at the Académie Humbert. Frequenting Parisian museums and galleries, Braque became particularly impressed by the paintings of the Impressionists, but by 1904 he began painting with brighter colors, inspired in part by the vibrant palette of Vincent van Gogh.

At the 1905 Salon d’Automne, Braque was struck by the strident colors and loose, expressive brushwork of Matisse and Derain’s first Fauve paintings. It was at this exhibition that the Fauve movement gained momentum, after art critic Louis Vauxcelles disparagingly called the artists “fauves,” French for wild beasts. During his stay in Antwerp in the summer of 1906 with Othon Friesz, Braque experimented with his first paintings in the Fauve style. As Matisse and Derain had done before him, he spent the winter in the south of France in order to paint the bright sunlight and water of the Mediterranean. He settled in the picturesque harbor town of L’Estaque, which had been a favorite spot of Paul Cézanne’s since the 1870s. At L’Estaque, Braque painted a series of vibrant Fauve landscapes that also betray the influences of Cézanne’s compositions. Braque exhibited six of these Fauve landscapes at the Salon des Indépendants in March of 1907.

Braque’s participation in Fauvism was short-lived; he was was late to join and left the movement early, and by the fall of 1907 he was already moving away from the style. He looked increasingly to the example of Cézanne—whose memorial retrospective Braque visited in October—and he began painting in a more subdued palette with an emphasis on geometric forms and flattened spaces. In the fall, Braque met the dealer Daniel-Henry Kahnweiler and also the poet Guillaume Apollinaire, who took Braque to Pablo Picasso’s studio. There Braque was astounded by Picasso’s monumental canvas, Les Demoiselles d’Avignon. In response, Braque painted his own Large Nude in 1908, which incorporates the rawness, shallow space, and the muted colors of Picasso’s work.

In the summer of 1908, during another trip to L’Estaque, Braque completed a group of stark, largely abstract paintings that simplify the forms of the landscape into geometric forms and planes. In November, Kahnweiler organized Braque’s first one-man exhibition, showing more than twenty of these paintings. Reviewing the exhibition, Vauxcelles described Braque’s work as “full of little cubes”—apparently echoing a remark made by Matisse—which coined the name for the nascent Cubist movement. These paintings in turn influenced Picasso, who became very close with Braque by the winter of 1908-09. Visiting each other daily, Braque and Picasso worked together to pioneer the radical style of Cubist painting. Their collaboration was so close that Braque famously later described them as two mountaineers, roped together.

By 1910-11, they had developed the style known as Analytic Cubism, painting compressed and shallow spaces with a reduced palette of browns and grays.  By representing their subjects from multiple viewpoints, they rejected illusionism and traditional perspective, radically breaking with the history of art and painting.  Braque and Picasso preferred to represent the traditional subject of the still life in these radical paintings—usually including the simple tabletop elements of bottles, fruits, pipes, newspapers, and musical instruments—but since the forms are abstracted into facets and planes, the subjects can only be identified in flickering glimpses.

In 1912, Braque and Picasso began incorporating collage elements and unusual materials into their works, developing the second stage of Cubism known as Synthetic Cubism. After Picasso collaged a piece of cloth in his painting, Still Life with Chair Caning, Braque developed the papier collé, or pasted paper, technique.  He made his first papiers collés by collaging faux-bois paper into his Cubist compositions. Upon seeing Braque’s first papiers collés, Picasso began working with the technique and immediately adopted a wide range of papers, including daily newspapers and other referents to popular culture.  Braque adopted new materials more slowly, but by 1913 he too was incorporating cut pieces of newspaper, tobacco and cigarette boxes, and colored papers into his work. Drawing upon his painter-decorator background, Braque often contrasted his faux-bois papers with painted passages of imitation wood-grain, which he achieved by using a metal decorator’s comb. He also began to experiment with mixing sand into his paint to achieve different tactile and textural effects, a technique he would frequently use for the rest of his career.

Braque and Picasso’s fertile artistic collaboration lasted until the outbreak of World War One in 1914, when Braque enlisted in the French army. He suffered a serious head wound in 1915—which required a major surgery and a lengthy hospitalization—before being discharged in April of 1916. He resumed painting in late 1916, but only made three works in that year. In 1917, he returned to the Synthetic Cubist themes that had occupied him before the war, including experiments with shaped canvases and the papier collé technique. He began painting with more vivid colors and richer surfaces, moving away from the muted palette and austerity of his earlier Cubist paintings. In the winter of 1918-19, he began a series of large-scale, vertical compositions that feature still life arrangements placed on guéridon tables. Braque’s fame grew in 1922 on the occasion of an exhibition of his work at the Salon d’Automne in Paris. In that year, Braque also began his Fireplace series, a group of paintings that feature still life compositions on mantelpieces with elaborate surfaces, bright colors, and complex patterns. In the 1920s, Braque shifted from the imitation of wood surfaces to the imitation of marble, a shift that reflects the broader change towards the luxuriant and ornamental in Braque’s oeuvre. Though he continued to explore the formal innovations of Cubism that he had pioneered before the war, Braque’s still lifes became increasingly sensuous and lyrical by the end of the decade.

In 1929, Braque built a studio in Varengeville-sur-Mer, on the Normandy coast, where he had spent many summers as a youth. He began to paint small landscapes again—a subject he had largely abandoned in recent decades—but the still life remained his preferred subject. By the early 1930s, Braque was internationally acclaimed as a still life painter and he enjoyed increasing recognition with his first major retrospective in 1933 at the Kunsthalle Basel. His still lifes at this time became increasingly colorful, decorative, and rhythmical, often featuring organically curved and fantastically colored shapes against ornamental backgrounds. His Tablecloth series of the mid 1930s—with their vividly colored fruits, glasses and guitars placed against richly patterned tablecloths and walls—epitomize Braque’s increasingly lyrical and sensuous aesthetic. In 1936, Braque also began to paint wider interior views, introducing silhouetted, flattened figures into his ornately decorated rooms.

Towards the end of the 1930s, as World War II was approaching, Braque began to paint darker, more macabre subjects in his Vanitas series, often including skulls as elements in his still life compositions. Following the German occupation of Paris in 1940, Braque ceased painting, but he began working again in 1941, painting a series of stark interiors and somber still lifes. He remained in Paris for the remainder of the war. In 1944, after the liberation of Paris, Braque returned to his studio in Varengeville, where he began a series of spatially complex interiors that include billiard tables, for which the series is named. In 1949, he began a new series of Studio paintings that depict the artist’s studio. He painted nine variations of the Studio paintings by 1956; all but the first of the series are large in scale. These paintings feature the artist’s surroundings—both the real elements of his studio and often the imaginary presences of birds passing through—in a fragmented and ambiguous aesthetic. Braque became chronically ill in 1959, which prevented him from undertaking large-scale works, but he continued to work on smaller projects, including small paintings and lithographs for the last few years of his life. In 1961, he became the first living artist to have his works exhibited in the Louvre. He died on August 31, 1963, in Paris. 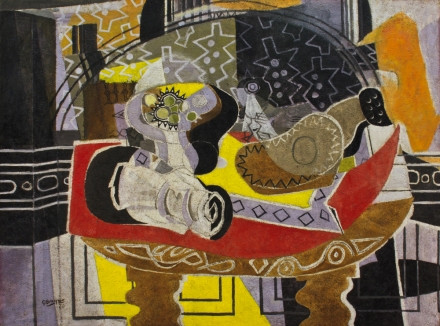