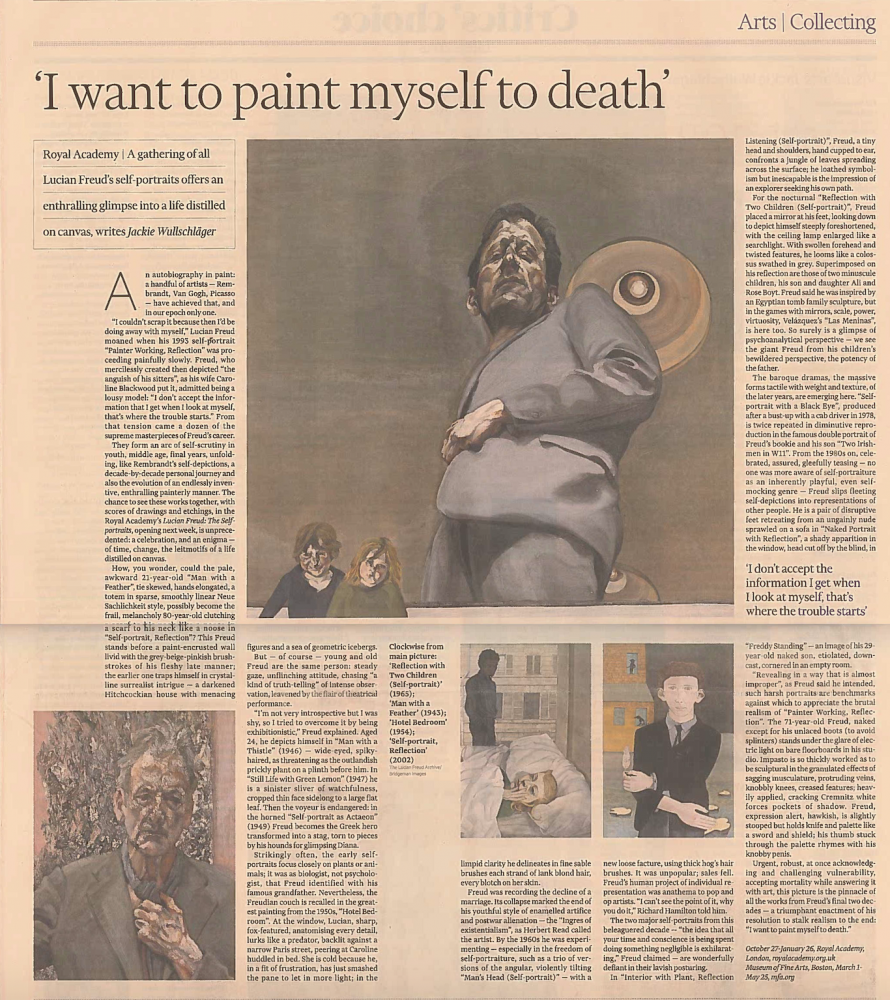 An autobiography in paint: a handful of artists – Rembrandt, Van Gogh, Picasso – have achieved that, and in our epoch only one.

“I couldn’t scrap it because then I’d be doing away with myself,” Lucian Freud moaned when his 1993 self-portrait “Painter Working, Reflection” was proceeding painfully slowly. Freud, who mercilessly created then depicted “the anguish of his sitters,” as his wife Caroline Blackwood put it, admitted being a lousy model: “I don’t accept the information that I get when I look at myself, that’s where the trouble starts.” From that tension came a dozen of the supreme masterpieces of Freud’s career.

They form an arc of self-scrutiny in youth, middle age, final years, unfolding, like Rembrandt’s self-depictions, a decade-by-decade personal journey and also the evolution of an endlessly inventive, enthralling painterly manner. The chance to see these works together, with scores of drawings and etchings, in the Royal Academy’s Lucian Freud: The Self-portraits, opening next week, is unprecedented: a celebration, and an enigma – of time, chance, the leitmotifs of a life distilled on canvas.

How, you wonder, could the pale, awkward 21-year-old “Man with a Feather,” tie skewed hands elongated, a totem in sparse, smoothly linear Neue Sachlichkeit style, possibly become the frail, melancholy 80-year-old clutching a scarf to his neck like a noose in “Self-portrait, Reflection”? This Freud stands before a paint-encrusted wall livid with the grey-beige-pinkish brushstrokes of his fleshy late manner; the earlier one traps himself in crystal-line surrealist intrigue – a darkened Hitchcockian house with menacing figures and a sea of geometric icebergs.

But – of course – young and old Freud are the same person: steady gaze, unflinching attitude, chasing “a kind of truth-telling” of intense observation, leavened by the flair of theatrical performance.

“I’m not very introspective but I was shy, so I tried to overcome it by being exhibitionistic,” Freud explained. Aged 24, he depicts himself in “Man with a Thistle” (1946) – wide-eyed, spiky-haired, as threatening as the outlandish prickly plant on a plinth before him. In “Still Life with Green Lemon” (1947) he is a sinister sliver of watchfulness, cropped thin face sidelong to a large flat leaf. Then the voyeur is endangered: in the horned “Self-portrait as Actaeon” (1949) Freud becomes the Greek hero transformed into a stag, torn to pieces by his hounds for glimpsing Diana.

Strikingly often, the early self-portraits focus closely on plants or animals; it was as biologist, not psychologist, that Freud identified with his famous grandfather. Nevertheless, the Freudian couch is recalled in the greatest painting from the 1950s, “Hotel Bedroom.” At the window, Lucian, sharp, fox-featured, anatomizing every detail, lurks like a predator, backlit against a narrow Paris street, peering at Caroline huddled in bed. She is cold because he, in a fit of frustration, has just smashed the pane to let in more light; in the limpid clarity he delineates in fine sable brushes each strand of lank blond hair, every blotch on her skin. Freud was recording the decline of a marriage. Its collapse marked the end of his youthful style of enameled artifice and postwar alienation – the “Ingres of existentialism,” as Herbert Read called the artist. By the 1960s he was experimenting – especially in the freedom of self-portraiture, such as a trio of versions of the angular, violently tilting “Man’s Head (Self-portrait)” – with a new loose fracture, using thick hog’s hair brushes. It was unpopular; sales fell. Freud’s human project of individual representation was anathema to pop and op artists. “I can’t see the point of it, why you do it,” Richard Hamilton told him.

The two major self-portraits from this beleaguered decade – “the idea that all your time and conscience is being spent doing something negligible is exhilarating,” Freud claimed – are wonderfully defiant in their lavish posturing.

In “Interior with Plant, Reflection Listening (Self-portrait),” Freud, a tiny head and shoulders, hand cupped to ear, confronts a jungle of leaves spreading across the surface; he loathed symbolism but inescapable is the impression of an explorer seeking his own path.

From the nocturnal “Reflection with Two Children (Self-portrait),” Freud placed a mirror at his feet, looking down to depict himself steeply foreshortened, with the ceiling lamp enlarged like a searchlight. With swollen forehead and twisted features, he looms like a colossus swathed in grey. Superimposed on his reflection are those of two miniscule children, his son and daughter Ali and Rose Boyt. Freud said he was inspired by an Egyptian tomb family sculpture, but in the games with mirrors, scale, power, virtuosity, Velázquez’s “Las Meninas,” is here too. So surely is a glimpse of psychoanalytical perspective – we see the giant Freud from his children’s bewildered perspective, the potency of the father.

The baroque dramas, the massive forms tactile with weight and texture, of the later years, are emerging here. “Self-portrait with a Black Eye,” produced after a bust-up with a cab driver in 1978, is twice repeated in diminutive reproduction in the famous double portrait of Freud’s bookie and his son “Two Irishmen in W11.” From the 1980s on, celebrated, assured, gleefully teasing – no one was more aware of self-portraiture as an inherently playful, even self-mocking genre – Freud slips fleeting self-depictions into representations of other people. He is a pair of disruptive feet retreating from an ungainly nude sprawled on a soda in “Naked Portrait with Reflection,” a shady apparition in the window, head cut off by the blind in “Freddy Standing” – an image of his 29-year-old naked son, etiolated, downcast, corned in an empty room.

“Revealing in a way that is almost improper,” as Freud said he intended, such harsh portraits are benchmarks against which to appreciate the brutal realism of “Painter Working, Reflection.” The 71-year-old Freud, naked except for his unlaced boots (to avoid splinters) stands under the glare of electric light on bare floorboards in his studio. Impasto is so thickly worked as to be sculptural in the granulated effects of sagging musculature, protruding veins, knobbly knees, creased features; heavily applied, cracking Cremnitz white forces pockets of shadow. Freud, expression alert, hawkish, is slightly stooped but holds knife and palette like a sword and shield; this thumb stuck through the palette rhymes with his knobby penis.

Urgent, robust, at once acknowledging and challenging vulnerability, accepting morality while answering it with art, this picture is the pinnacle of all the works from Freud’s final two decades – a triumphant enactment of his resolution to stalk realism to the end: “I want to paint myself to death.”