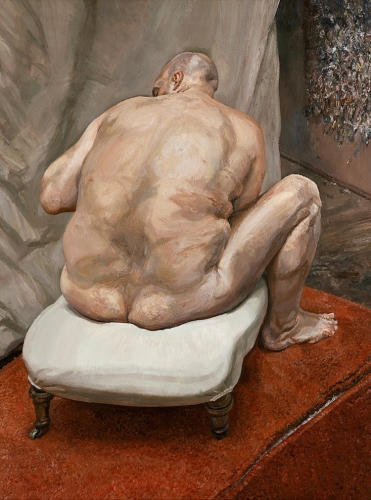 This April and May, Acquavella Gallery exhibited more than a dozen naked, yes naked, portraits by the late master, Lucian Freud. Curated by his longtime studio assistant and friend, David Dawson, the show offers visitors a rare chance to experience the powerful physical presence captured in these large scale works before they return home to mostly private collections.

Acquavella is located just a few blocks south of the Metropolitan Museum, which had hosted an enormous retrospective for Lucian in the mid-'90s, my first opportunity to see his work in person. I had learned about the exhibition from a New York Times article and took the bus from Washington, D.C. to see it. At the time, I was an impressionable 16-year-old who already identified as an oil painter, and my jaw hit the floor when I saw what Lucian was able to achieve. It was as if he made paint mimic the heavy physicality of human flesh, not just illustrating its likeness but actually translating into paint what it feels like to experience the presence of another human being.

After obsessively studying the exhibition catalog, I found myself heavily influenced, emulating his approach for constructing a naked body with thick strokes of flesh tones. When I finished high school, I wondered if it would be possible to study with him, but I was soon dissuaded by others who felt that getting to know the man behind these paintings was not advisable for a young malleable mind. Accepting this possibly false wisdom, I continued to be influenced and even wrote an essay about how Lucian used the space in the background to suggest the mental state of his sitter. After a few years of him as my absolute favorite, another influence struck and I began drifting in other directions.

Fast forward to this Spring, and upon hearing about the current exhibition, I found myself again hungry for the luscious surfaces of Lucian's paintings. Taking the 6 train uptown, I felt almost the same excitement as if I were on my way to meet up with a previous lover. Even as I took inventory about what had caused us to 'break-up,' acknowledging that maybe these paintings were not uplifting images of humanity, there was a real potential to rekindle an old romance. Catching my breath, butterflies nearly in my stomach, I stepped into the gallery welcoming the impact of paint as flesh - Lucian's nearly brutal, unapologetic depictions of the everyday people he had met and come to love.

On the first floor, were two of the paintings that had haunted me most from that first exhibition I had seen 25 years ago. The 8-foot by 6-foot portrait of performance artist Leigh Bowery's massive body - pierced cheeks, bald head, and exposed genitals - is still shocking, as is the Metropolitan Museum-owned portrait of his back as he sits, dwarfing a white ottoman. Convincing depictions like these that reveal the unflattering side of humanity had rarely been exhibited at this scale before Lucian had painted them.

Presented in the upstairs gallery was a painting called Sleeping Benefits Supervisor, which made news in 2008 when it sold at auction for $33.6 million, setting a new record for the highest price paid for a work by a living artist. Given a beautifully ornate wall of its own, the painting depicts the massive weight of Sue Tilley, exhausted from work and precariously in danger of falling off the couch in Lucian's former home and studio.

Probably my favorite painting in the show was also of Sue, Sleeping by the Lion Carpet. The vertical composition, about 7.5 ft tall by 4 ft wide, holds a richness of color in the flesh tones that stood out to me. Using touches of the same blue found in the carpet in the background, Lucian leads the eye straight to her breast, her skin nearly struggling to maintain her mammaries, then to her wrist supporting a crumpled face. Complimentary to this eye-leading blue, the flesh tones glow in a delicious, subtle pink-orangeness, which makes this painting seem more rich in oil and color, and less chalky than most of the other works.

I left the show feeling a deep satisfaction and satiation as if I had just dined upon a decadent meal, perhaps a leg of lamb as Lucian loved to prepare for his beloved subjects. As I pondered how this sensation could be evoked by the large scale works, I stumbled upon the Acquavella booth at Frieze and fell in love with the tiny naked portrait that they were offering. If only I had $3.5 million in my pocket, I would have loved to make that little painting my own to savor daily. As I was clearly enamored, a gallery associate approached me. I fired off my story and many curious inquiries regarding Lucian's process and inspirations. She recommended that I attend a panel discussion the next week at the gallery with David Dawson, Michael Auping, and Philippe de Montebello.

As we all know, there is nothing like getting information straight from the source. With Lucian having passed away at the age of 88 in 2011, his dear friend and painter David Dawson, who is now director of the Lucian Freud archive, is the next best thing. In a conversation that barely lasted an hour, I learned more about Lucian's process and intent than I could gather from all of the various texts I had consumed previously.

Dawson explained that when Lucian was turning 70, he made the decision to really go for it. He had already been painting for 60 years and in the next two decades, he pushed it as far as he could go. One year before that, his close friend Francis Bacon died, and this somehow compelled him to become more resolute as a painter. Dawson suggested that it was through his friendship with Bacon that Lucian was inspired to paint with large, more loosely coarse hair brushes. During the next couple of decades, his paintings became increasingly rough, thick, and goopy as he produced work that successfully transformed paint into a reality of flesh.

Lucian always painted his beloved subjects in interiors. He liked working in domestic-sized rooms, rooms where people lived. Lucian's process involved painting directly from life, taking on average two years for a single painting. He got to know his sitters deeply and felt a lot of empathy for them, aiming to make them feel safe. As the sitter, no one was more important to him and he wanted to know everything about you. Lucian didn't like the word nude. He preferred that word stripped to an essence, while in his mind, nude was just erotic. He avoided people considered beautiful, and those who sat for him were never professional models. Lucian thought that models developed a second skin that painting someone naked is a more intimate and complete way of doing a portrait.

The presence of the figure was a very important aspect of Lucian's work. If he had completed the figure, he would still need his sitter present in order to paint the background. He believed that the human presence lent an aura affecting the surrounding vision of the space. He did not pose his models. He wanted them to naturally settle in and would only occasionally request minor adjustments. He needed to be one-on-one with his subject, and even his assistant would ask them to leave the room while he was painting. He so much liked to work in close proximity to his subjects as possible, that the shadow of Lucian's head can be seen in compositions.

For those who are not already aware, Lucian is a grandson of the great psychoanalyst Sigmund Freud. Perhaps by different means, through theoretical writing and the act of painting, they developed approaches for peering deeply into their subjects. Lucian was 16 years old when his grandfather died, but considered Dr. Freud's work to be poetry. Dawson noted that Lucian said people often wanted to blame him for the problems they had with his grandfather.

Lucian wanted his paintings to seduce, disturb, and convince-with a little bit of poison. They should contain a sense of mortality. He really wanted people to see the work. He believed that painting survives because people want to look and see, so be sure to make your way to this exhibition before it closes.

Text by David Molesky for Juxtapoz.