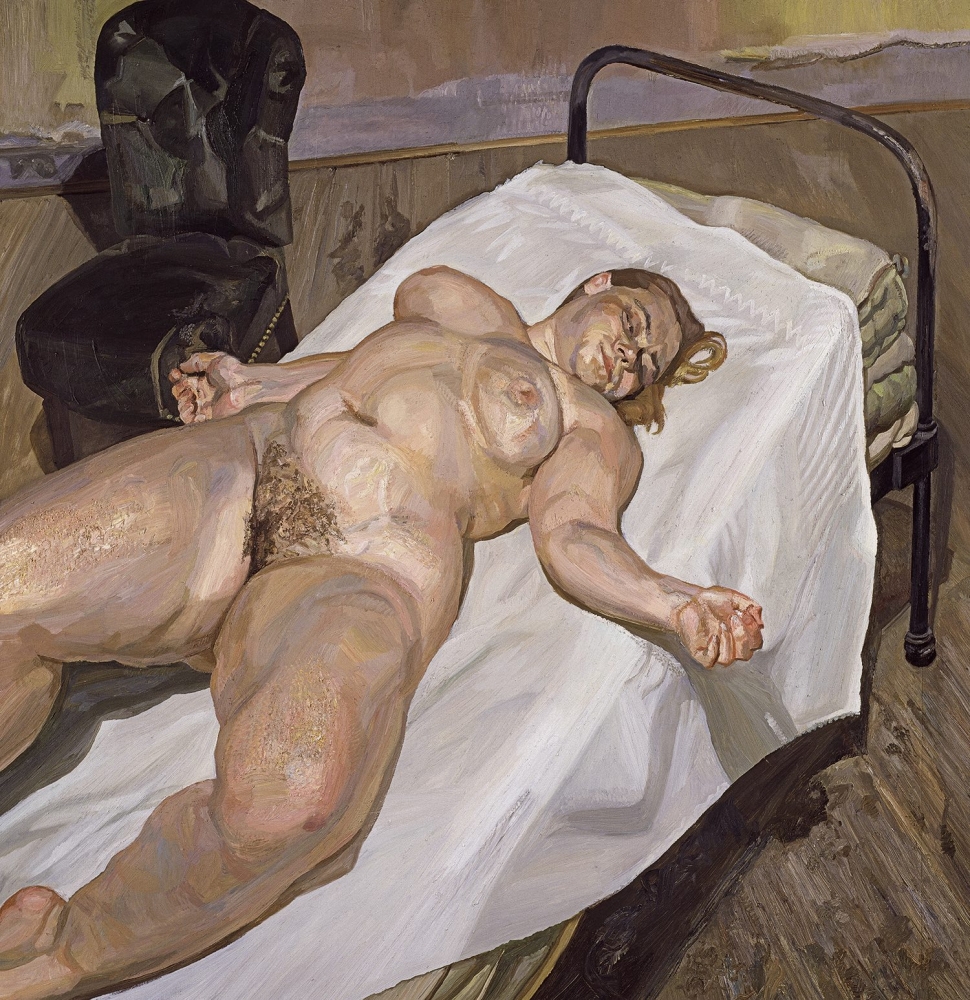 The English painter Lucian Freud, along with Francis Bacon, was a master realist active in the 20th century. This inspiring show affords viewers the chance to see his achievement, which aligns with but quickly moves beyond academic portraiture. As a young man he explored Precisionism--his self-portrait of 1952 stands out as a work of indirect emotion and also unusual technical skill. In this exhibition, we see the works done in the 1990s: mostly nudes, executed not precisely but with feeling, presenting an impastoed surface. There are more than a few paintings of heavy people who are completely undressed, women as well as men. Freud, for all the controversy he incurred in his life, is actually a painter pushing ahead centuries of tradition: a figurative artist who paints with empathy while suggesting the past. Often the portraits are of persons sleeping; sometimes, the paintings include dogs. The ambience of these pictures is muted, often nuanced with shadowing. Freud also suggests, somehow, a symbolic atmosphere, in which erotic feeling presents. They can be seen, psychologically, as Freudian--in the sense we give to his grandfather’s writings.

In Freud’s work, we can experience the point of view of an artist whose interior life matched his vocational command, both of them extraordinary. The genre of portraiture goes back more than a while; artists such as Bellin and Bronzino established the genre in greatness. They were reflections of the sitters, though, and not as much the demonstration of the artist’s sensibility--even though the artist’s emotional insight is inevitably available. In Freud, what we find is an equivalent for his own moody, sexual impulse. Today, we almost always find art to be the consequences of the artist’s personality, but perhaps this was not the case before--perhaps the portraits by the Renaissance painters mentioned are simply that: visual likenesses we can refer to more as likenesses than evidence of the artist’s feeling.. Looking at Freud, the emotion we find in his art surely makes it clear that he was a person of appetite, as well as a professional painter.

Naked Man, Back View (1991-92) offers a view of Leigh Bowery from behind. Without clothes, seated on a low hassock upholstered in white, the figure shows us a magnificently painted back, mostly in flesh color but also possessing other colors: browns and bits of blue and green and pink (when I saw the painting a long time ago, my first thought was that the sitter’s back could be likened to landscape). The dun color of Bowery’s flesh is offset by the off-white curtain hanging behind him, as well as a wall covered with myriad bits of colored paint. So, in a slightly hidden fashion, the painting is about painting as much as it is about figuration. The figure’s closely shaven head is turned slightly to the side, so we see the left side of his face--his eye--as he gazes downward. Then, in Naked Portrait with Green Chair(1999), a thick-set woman, naked with light brown hair, rests or sleeps on a single bed. The white sheet contrasts sharply with the flesh color of her body, like Bowery’s painted with blues and pinks. A green chair, its seat put together with circular yellow studs, sits on the left of the painting, while the wall behind the woman is variously colored light purple, yellow, a muddy red. Again, like Naked Man, Back View, this work is as much about the act of painting as it is about its subject matter.

The painting titled Benefits Supervisor (1995), of a naked, obese woman sleeping on an off-white couch with flower-print pillows, is an occasion for Freud’s mastery as an artist. She lies dormant with her head on the left. Her hair is dark and cropped. The sitter’s immense breasts and the folds of flesh making up her belly and her thighs are variously colored in the manner described for the two paintings discussed above. The floral imagery on the pillows, mostly green and light brown with touches of darker pink, is set against pinks of the woman’s great weight. The wooden floor is created with vertical streaks of reddish brown, while the off-color-white of a long curtain is draped behind the couch. Because the figure is much more than heavy, it plays against our expectations, historically established, of the female nude. Likely, this is what gives the painting its innovational aura, although inevitably it also belongs to art historical convention. By painting a woman who exists outside traditional norms of beauty, Freud undermines the expectations we bring from past art.

The final work, Sunny Morning--Eight Legs (1997), can be briefly described: a naked man holding a whippet sleeps on a sheeted bed that crosses the painting horizontally. Underneath the bed, we see a bent pair of human legs, from the thighs to below the knees, but nothing else. Once again, we see a multi-colored (but mostly brown) floor, in front of and behind the bed. In the back a variously hued wall, with moulding below, surrounds a window filled with yellow light. On the far left, we come across a  dark-green form, maybe a dresser. The painting, like the others I have described, leans toward a statement of usual esthetic form and color established by time, but it becomes as well something new. The nakedness is more than nude; it is a pronouncement of sensuality that is occasioned by the experience of prior painting. In this sense, Freud is a conservative artist. At the same time, he is also a contemporary one, in the sense that he finds a way to torque figurative art’s penchant for the nude into something emotionally forboding. The psychology of his work, not fully available in our perception of it, is nonetheless recognizable in our recognition that Freud was an authority in regard to the body and its needs, no matter who he was painting